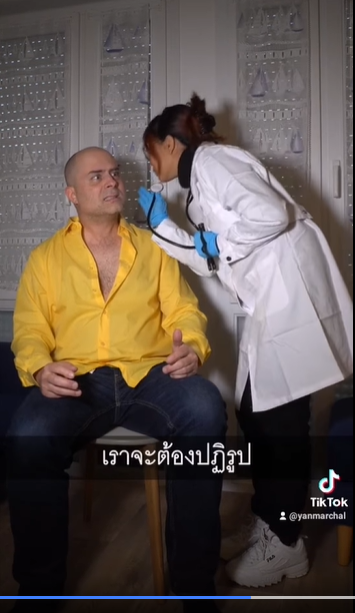 Yan Marchal is yet another artist, with music archived at this site, who is currently being persecuted by the Thai government. Yan used his “white privilege” (in this case, the fact that the Thai authorities hesitate to move against a Westerner in the same brutal way they might move against a Thai) to good effect. It all began with “Junta Anthem Update,” (June 2019) a short spoof of Dictator Prayut’s “Returning Happiness to the People” music video (which had already been spoofed many times, including by Port Faiyen). Yan’s spoof went viral, due in part to the novelty of a non-Thai creating funny content in Thai. In answering the question of how a non-Thai came to care so much about the issue, Yan points out he is a long-time resident of Thailand with two half-Thai children living in Thailand, so he totally does have a stake in the future of Thai democracy. At the same time, he warns others who might be considering a bold move not to do it without weighing the risks. He was always aware he could be kicked out at any time, not for doing anything wrong, but for annoying the dictatorship.

“Junta Anthem Update,” was followed by my favorite Yan Marchal moment, the hilarious “คันตูด” “Itchy Butt” (July 2019) music video, which again makes fun of Dictator Prayut. This song imagines that because irritable General Prayut is always sulking and blowing up at someone for one “butt hurt” or another, he would be looking for a cure for his “itchy butt.” Yan, imitating Prayut in a bad mood, dances around as if his butt itches, and considers various remedies from Vaseline to various scary vegetables that could be (presumably) be inserted into the irritated orifice. In the end, Yan pulls down his pants and moons the camera (with a censored sticker appearing just in time to keep it all rated PG).

Clowning around for a good cause was probably what made Yan Marchal famous. He was OK with looking ridiculous for a minute for the sake of a viral video that would help open up the space for free speech in Thailand. Having achieved fame from those first silly short videos, by September he was collaborating with famous Thai prodemocracy activist Bow Nutta Mahattana for a series of online chats titled “What’s up Thailand,” addressing a range of important topics in English. For instance in Episode 5, they discussed cyber-bullying, as they had both become targets of bullying for expressing their political views. Yan speaks Thai and made it a point to be at important events—shows of support for prodemocracy activists thrown in jail or newly accused of crimes, cutting-edge concerts and art shows, and protests of all sizes—to record the events for any curious Facebook followers unable to attend. In this capacity, he informally interviewed many famous activists, usually in Thai. He let us all be a fly on the wall at many interesting moments.

Yan Marchal The Phenomenon didn’t just appear out of nowhere. He has long been one of the biggest non-Thai fans of Thai protest music. Anyone who heard Rap Against Dictatorship’s (RAD) first big hit “ประเทศกูมี” “Pratet Gu Mee” (“What My Country’s Got” OR “My Fucking Country”) went nuts over it. For the record, I said, “This music video is quite simply the greatest thing in Thai protest music since I have been following Thai protest music.” That song was astounding from day one. It went viral nationally and internationally and eventually won the Vaclav Havel Prize for Creative Dissent at the Oslo Freedom Forum in June 2019. HERE they are accepting the prize. Yan attended and recorded the earliest RAD concerts, and memorized the lyrics to “Pratet Gu Mee” (if I remember correctly). He translated other Thai rap songs, including “Feel the Noise” (March 2019) by X-Seven who is a Rap Against Dictatorship artist. That stirring song samples from “Can You Feel the People Sing” [in Thai]. Several times Yan and I, independently, rushed to translate the same newest, greatest Thai protest song into rhyming English. I came out with an English version of the stunning “คนที่คุณก็รู้ว่าใคร” or “You Know Who” by Commoner สามัญชน before he finished his. This chilling song and music video, featuring Pai Dao Din, shows a body bag being dropped into a river and attributes the 9 assassinations of Thai refugee dissidents over 2016-2020 to “You Know Who” or “He Who Shall Not Be Named.” (Yan has a t-shirt advertising this song.) Not long after “You Know Who,” an equally amazing song came out, this one happy and comedic. Yan finished a rhyming version of “กล้ามาก เก่งมาก ขอบใจ” (So Daring! So Talented! Thank You) by Peng Surachet, before I could get mine started. The title comes from an embarrassing interaction between King Vajiralongkorn and a gushing fan who got to meet him for a moment. Yan’s adaptation of the song (January 30, 2021) is called “Ain’t It Brave of You” and changes the tune from upbeat pop to a particular afro-latin style in a minor key. In addition to Thai music, Yan is a huge fan of Kizomba music, and attends dance conventions devoted to this genre. Perhaps because this performance is eclectic squared, the video never took off to the point of going viral. But it does stand as a testament to Yan’s creative independence, deep background, and strong convictions. And it may have been the video that got him in trouble.

In all his videos, Yan followed the methods that Thai activists in Thailand use to steer clear of Article 112, the lese majesty law: they target Dictator Prayut (rather than the monarchy), state indisputable facts, ask innocent questions, and/or use symbols several steps removed from the thing they symbolize. And more recently all the activists, Yan included, are simply reasserting their legal and human right to political dissent. For instance, in a recent tic toc video made with a member of Faiyen band, Yan wore a t-shirt saying (in Thai) “Repeal the lese majesty law. Reform the monarchy,” which are the central demands of the Thai prodemocracy movement at the moment.

As has been proved over and over, trying to steer clear of the lese majesty law is pointless if the Thai powers-that-be find you annoying and want to get rid of you. Just ask protest musician Port Faiyen who is charged with lese majesty (Article 112) for commenting on a coup IN TURKEY. On the other hand, it’s impossible to imprison everyone speaking out about the current king, especially when their criticism is valid. Given the uneven and nonsensical application of 112, just doing what seems right and letting the chips fall where they may, isn’t such a terrible strategy.

During the Save Faiyen campaign (and many other campaigns defending the human rights of targeted dissidents), Yan was a rare non-Thai who would openly join the campaign—usually because he was already an enthusiastic fan of the dissident’s work. When Port Faiyen was arrested in Thailand (though everyone had thought he was in France), Yan was one of the first to report the full story in English. When weighing the choice between staying silent and safe, or using his voice to help someone, he repeatedly chose to help.

On his recent vacation to France (Yan is French), he met with members of Faiyen band–Jom, Khuntong, Tito, and Yammi–who have been granted asylum in France as political refugees, and he even made several tic toc videos with Yammi. This visit appeared to be a peak experience. The chemistry between everyone was clear from the many social media pictures and video. In my favorite tic toc video, Yammi plays a doctor while Yan plays a royalist patient whose reported symptom is that he gets enraged when anyone insults the monarchy. Yammi examines him, then diagnoses: “It’s that you don’t have a heart. And you don’t have a brain either . . . It’s hard to treat, but don’t lose hope. You just need to increase your knowledge and empathy for other people. Then you will be able to tolerate different opinions. For instance . . .” And she leans down and whispers in his ear, “We must reform the monarchy.” Yan responds with an Oscar-worthy scream.

The dissident artists make fun videos, but their plight is dead serious. Eight friends of Faiyen band were assassinated between 2016 and 2019, including two of Port Faiyen’s former roomates (DJ Zunho and Siam Teerawut). Siam was an informal member of Faiyen band. Port himself is awaiting trial in Thailand over nonsense lese majesty charges. Rap Against Dicatorship artist Dechathorn Bamrungmuang, has been in and out of jail, and was warned last week by Apple that his phone may be hacked by a government. At least three people who guest stared in that hilariously funny music video that Yan adapted into English-language and afro-Latin musical style are currently in jail facing possible life sentences (Penguin, Rung, and Pai, aka the leaders of the current prodemocracy movement.)

In getting kicked out of Thailand for silly music videos, Yan is in great company. The exact same thing happened to Yammi after her music video “ขันแดงแสลงใจ” “Offended by a Red Bowl.” Perhaps this tragedy can’t be changed, but I thought I would give my unique perspective on how the story unfolded, so you might better understand why Yan Marchal went out on a limb for Thai democracy.